The house, that stepped out 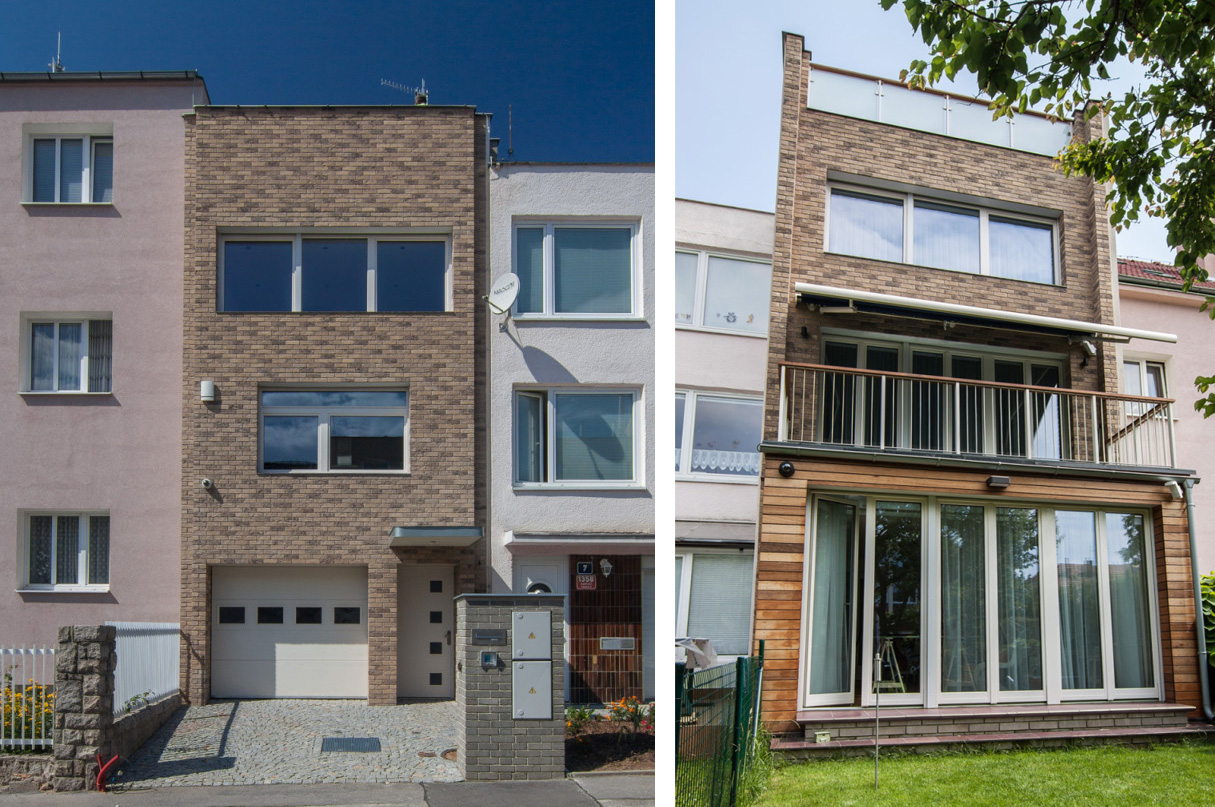 Design and build project of radical reconstruction of a terraced house from the first half of the seventies of the twentieth century. We converted the house into a modern dwelling with a flat habitable roof build using the best materials and construction solutions.

“Surprisingly, there is plenty of room for what a small house looks like from the outside”

Step by step process of a house building

Original concept. The architects took the style of masoned English terraced houses as a model, mainly because of their economy and verticality of a layout. The width of individual houses is only 4.56 meters but have three floors. The ground floor is partly technical, there is a garage, boiler and access to the garden. The main living area is on the first floor. There is a living room and kitchen with dining room. On the second floor there are bedrooms and bathroom. The dispositions are purposeful, economical and logical. All home “operations” are purposefully separated and the orientation of the rooms takes advantage of the differences between the public side to the street and the more intimate to the courtyard of the gardens. Constructional solutions. The basic building material is armaporite blocks, which is the first generation of gas silicate blocks. A similar building material is now known primarily under the trade name Ytong. They are used both for load-bearing walls in the width of 24 cm and as partitions 7.5 cm wide. The gable walls are probably lined with 30 cm wide blocks to increase thermal insulation. The ceilings are made of non-standard prefabricated construction sites with spatial filigree reinforcement with a total thickness of 24 cm. Here too, we can see an effort to be economical and consider all the supporting elements as minimal as possible. The roof superstructure is realized as a turnkey wooden building. Initial conditions of reconstruction. However, this cost-effectiveness means significant limitations for our reconstruction. Due to the slenderness of all bearing elements, it will not be possible to increase the load, so all added structures must be as light as possible. For the same reason, it will not be possible to “sew” engineering networks into load-bearing walls, and alternative routes must be sought. The creation of penetrations in ceilings will also be complicated due to the non-standard construction.

Completely reconstruct the original terraced house to meet the ideas of modern and comfortable living. Preserve the garage on the ground floor and take advantage of the possibility of extending the ground plan of the house – by pushing the street façade to the level of neighboring houses and setting the receding floor at the roof level and build a roof terrace. Before buying the property, the owner asked us to look at the house and say our opinion. At first glance it seemed to be a neglected socialist house. Tucked to it. But at first glance. On the other side, it was clear that this place had the potential, the energy, that there was something to do. The old house seemed to be asleep. As if forgotten, he was not cared for. Like he was dead. But the place shone with desire and shouted into the world as it wanted to be. Didn’t anyone hear me, what could I be? If you find a place like this, you could say with exaggeration that it was easy. Breath in. The house needed a breath. Raise your head, take a step forward to level with others. It was also by entering the investor’s house, if possible to enlarge it. The question is to what extent, he also reflected this potential of the place. Maybe they were both opposite.