David brothers and the pear 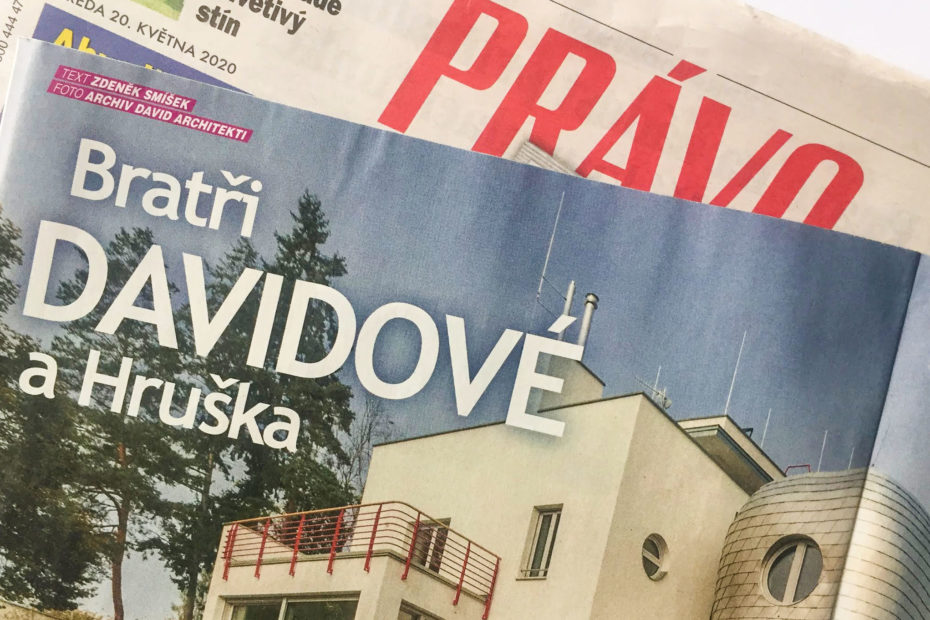 When two do the same thing, it demands interplay. If the partners are brothers, the question is whether
it is an advantage. After thirty years of cooperation, it is certain that yes. Igor and Aleš to David and
joint implementation of a wide range of projects. From office buildings
to the individual construction of family villas. Bold and classic. We are in tune
the siblings visited due to the completion of the First Republic villa between Benešov and
Prague.
This is a truly original extension of living space. So much so that it didn’t go in
Prague studio not to ask an introductory question: Who got the idea for an atypical, and therefore
Probably a laborious completion – the investor or you? “The investor came to us with a simple one
by entering: We have an old house, which is essentially unchanged from his
position in 1935 (the author of the original house was the architect Václav Ittner from Prague) and
What about him? Our only condition is that we would like to live “on one” floor…
That’s how our cooperation started, “Aleš David returns in his memories.
Irreplaceable not to remove
“Actually, the whole thing was preceded by a debate between us and investors, whether the house
do not demolish and prefer not to start again. But very quickly we all agreed that this
the house has something in it. Something we can’t replace and it would be a shame to lose it. Also
I thought from the beginning that the locals were somehow subconsciously at the house
used to, ”Igor David recalls the beginning of the untrodden journey.
And the brother adds: “In the case of such a reconstruction, it is important to capture what is in
the original building is essential to preserve, respectively support and highlight. Here it is
it was the original pure functionalist body, everything else was already alive and had to
away! The requirement of investors to “live” on one floor meant that we have to
ground floor add two rooms. Bedroom and dining room. It seemed easy to enter. We have k
available a simple building that can be easily enlarged. Hey, no.
All attempts at such an enlargement looked like a village self-service built
in action “Z”. Well, unfortunate, “admits Mr. Igor.

Opposite as a starting point
When it didn’t work out in the first plan, the brothers of the architects thought that
there could be a possible path through some counterpart. “We have something simple here,
square, so we will build something round. Round in the sense of “free” shape.
Geometric shape versus organic shape, “states Mr. Aleš.
First they made a few sketches and then introduced the investor to their idea. “Pictures it
they weren’t very telling, but investors still liked the idea, so we could
continue. Although what he actually saw was not a sophisticated 3D rendering, but
a doodle of a cube and something like a potato stuck to it. I think it’s him and his
my partner liked the very idea of ​​two shapes. “

Gradually, of course, came to the table, we developed designs, up to plasticine
model, so it was obvious and clear what the authors were going to do.
Apollo in the garden
Upon completion, there was great enthusiasm for the overall impression, including the way it worked
Pear from the inside. “It was also an important question of how the room itself should look,
which arises there. Doing it consistently copying could be “too much” and too much
straighten – that again the extension would look like a backdrop. So we are the room itself
they were conceived in a simplified form as an exterior and they look great, “praise the creators
result. Of course, it was also a nut for craftsmen who had to skillfully
to cope with a truly original project.
However, he already divided the course of construction of the observer from the narrow and wider surroundings into two
irreconcilable camps. “I’m sure you’ll figure out the poles they hold. The house even survived
several nicknames and also one cartoon. The locals call it “vajthaus” or Apollo, “
Igor David adds with understanding and adds what the two real and biggest were
problems:
“Who will build the supporting structure – the skeleton, and who will put the mantle on it. Get a bunch of it
it took us two years to build. The original house was almost done and we haven’t started with yet
Pear – as we used to call it at work. It is a special, wooden building. But
companies that build wooden buildings were afraid of that, they just want to build equal things.
In the end, however, it turned out that the biggest problem was the biggest benefit. When we are companies
found, the building was already terribly easy, until it grew incredibly fast. Until it seemed
it goes all by itself. None of the craftsmen complained about anything, everything was clear. Just
a dream that does not occur often in construction, ”agree the architects’ brothers again.

PHOTO:
1-total shot) In the middle of the garden next to the functionalist villa from 1935 “landed”
futuristic object.
2 – detail Pears, preferably in height…) The extension of the living space made the exterior special
renovated house.
3 -double portrait) brothers Aleš and Igor Davidová
4) The basis is a wooden structure, which eventually grew after lengthy preparations
before your eyes.
5) The shell of the extension is from ……
6,7,8) The building attracted the attention of the surroundings already during its course. The wooden structure was
part of the original philosophy. The house is brick – wooden extension – light. Contrasts
they work.
9,10) Furnished interior….